There is now documented evidence that golf was first played at Weymouth in 1876, reported in a periodical called “The Field” a newspaper for country gentlemen. The site was located at East Chickerell between what is now the Wessex football stadium and Coldharbour. Golf continued to be played there through the turn of the century but in 1905 the local council wanting to get in on the rapidly popular sport commissioned J H Taylor to review golf in the area and as a result “Weymouth, Dorchester and County Golf Club” was founded, what we know today as “Came Down Golf Club.” Five Weymouth businessmen, unhappy with the set-up at the new club formed a syndicate, leased the land where Weymouth Golf Club is today and commissioned James Braid, a winner of the Open and a course architect to design a course, very similar to what it is today and golf was first played here in March 1910.

Financial difficulties following the First World War forced the “Syndicate” to sell the concern to the Town Council in 1922 and it has continued ever since. Following the sale of the golf club in 1922 golf continued under the administration of the Town Council, the members having no say in the running of the club. A “collection of municipal ticket holders” were appointed to run and record competitions only, their authority limited to just that.

In 1937, Walter Hagan ( a winner of The Open) and Joe Kirkwood from Australia played a match at Weymouth with Hagan coming out the winner. During the Second World War, the golf club again saw the plough with much of the course being planted for potatoes, but golf continued on the remaining holes. 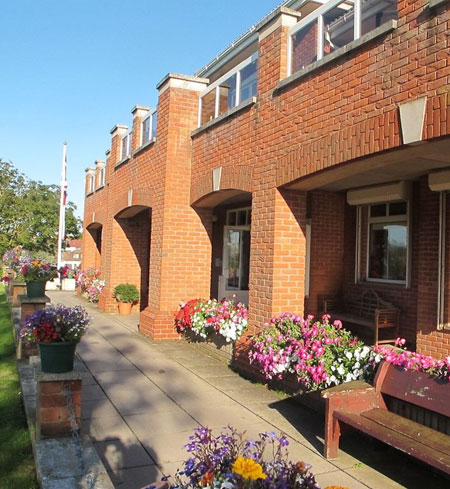 In 1953 the course was restored to its full 18 holes and was celebrated by an exhibition match between the three Whitcombe brothers and the Weymouth professional Fred Beets. Fred came to Weymouth Golf Club in 1913 from Norfolk and over the next 47 years as well as being the club professional did such things as greenkeeping, secretarial, cleaning, served in the bar and many other duties as and when required. His loyalty to Weymouth Golf Club is unsurpassed and on his “official” retirement in 1960 was made an Honorary Member of the club. A memorial to Fred stands on the practise putting green. In 1963, members worried about the course being shut down by the Town Council, decided to make an offer to the Council to take over the lease of the course and in 1965 “Weymouth Golf Club Limited” took over. During the eighties the club negotiated a 100 year lease from the Council and at the same time the layout of the holes saw a major revision when the town’s relief road was constructed across the bottom of the course. The final episode in the club’s history to date occurred in 1993, when the members moved into a magnificent new clubhouse with all its splendid facilities.